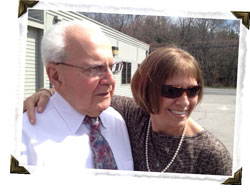 My dad, Anthony, is one of the happiest people I know. At 78 years old he’s a fabulous role model, content with who he is and with the life he and my mom Anne have created together. And he lives close by – 90 minutes away – something which gives us the chance to get together often.

I’m an “only child,” and so I often tell him that it’s not only in his best interest to stay healthy, but in mine too! Fortunately, he’s in relatively good health. Even so, I find myself a reluctant member of two statistical “clubs:”

A Fall and a Call

Neither club is one I was eager to join, but like many baby boomers, I had membership thrust upon me!

Last month, my dad developed a problem with his right arm. He had been cleaning a hallway light a couple of weeks earlier and, after missing the bottom step in a stairwell, fell on his arm. The pain made it difficult to sleep and he had recently noticed a large lump on the inner part of his arm.

Thankfully, and because of the work I do, my dad knew enough to give me a call. I was a bit concerned after hearing his description and so I asked that he immediately call his primary care physician and request an urgent appointment.

They got him in right away and after an examination, ordered an emergency ultrasound. So far, so good. But now things began to get complicated. After reviewing the ultrasound, they told him he would need an MRI and asked him to go home and await a call for a date and time.

When we spoke later that night, I realized there were many (too many) unanswered questions.Who was supposed to call? Who should he call if he did not hear anything? Why was waiting a few days okay? What did they anticipate after the MRI? Was the duration of time ticking away a problem and could it lead to functional deficits?

I’ll spare you the rest of the details, other than to tell you that the story has a happy ending. I called my dad’s Physician’s Assistant (PA) (they already had a signed letter from my dad on file which grants his physicians permission to speak with me about his health) and got to the bottom of things. Our questions have been answered and his arm is well on the mend.

That said, I was thankful for having several important things already in place and the episode served to remind me of the importance of planning ahead in caring for one’s parents. On that note, here are four specific suggestions for ensuring that you are equally prepared:

Needless to say, my dad is thrilled to know that his recent fall won’t have any long term impact on his functional abilities. After all, he bowls every Thursday night, he and my mom plan to paint their beach cottage this spring and his retirement job as a limousine driver requires use of his arm.

As for me – the “only child” and one of a select group of caregivers in his life – I’m glad to know he’s healthy and happy too!

How about you? Are you prepared to care for your parents?