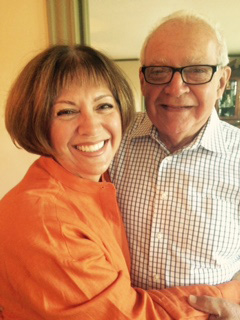 It all began two years ago, when my dad noticed a growth under the skin of his upper right arm. This “lipoma” (a benign, fatty tumor) didn’t bother him and so we, in collaboration with his physician, decided to do nothing about it.

Eighteen months later, he started to complain of a strange, sporadic tightening sensation in the right arm followed by an odd feeling in his head (“a sort of lightheadedness”) that would go away when he rested for a few minutes.

We went back for a re-evaluation and, thinking the lipoma was now pressing on the artery of his arm, had the tumor removed.

But the problem didn’t go away. Both my dad’s primary care physician and the surgeon who had removed the lipoma continued to speculate it was a vascular issue rather than cardiac, since his symptoms were on the right and not the left.

Finally, after a thorough evaluation and medical record review, a vascular surgeon suggested that maybe it was cardiac, even though the symptoms were “on the wrong side.”

One cardiology evaluation, two stress tests and an angiogram later, it was determined that my dad had two coronary artery blockages and would require bypass surgery, something that was performed successfully earlier this month.

Whew! My dad is home now and recovering beautifully. Still, I don’t mind telling you that when the ordeal was over and I had some time to think, I found myself feeling more than a little bit embarrassed.

Why had it not occurred to me to pursue a cardiac evaluation earlier? After all, the signs were all there: Shortness of breath when walking; lightheadedness that resolved immediately with rest; pain in the upper arm.

And while my dad’s cardiologist tried to soothe my feelings by asking me when I had become a cardiologist myself, I couldn’t help but wonder how I had missed the obvious.

According to Dr. Jerome Groopman, fifteen percent of all people are misdiagnosed as a result of “errors in thinking” by physicians.

He explains that within the first 18 seconds of meeting with a patient, a physician will generate an idea in her mind of what’s wrong, often interrupting the patient’s story in the process. This “anchoring mistake” may cause the physician to fixate on that snap judgement.

… the first thing the patient says;

… something in the medical records that somebody else concluded previously;

… some combination of all three.

In my dad’s case and given that, as the cardiologist explained, “he had an atypical presentation of a very common disease,” it’s easy to see why, initially, we were all led down the wrong path.

That’s why Dr. Groopman wants us, as patients, to understand how physicians think and to encourage our doctors to think more broadly. Specifically, he suggests asking two critical questions when given a diagnosis:

Over the past two weeks, I’ve relived every conversation I had with my dad and his doctors, going way back to the appearance of his first symptoms. Here then are some suggestions to help you and your loved ones act as your own best advocate when you suspect something may be wrong:

My experience with my dad – something that occurred despite the talented group of physicians with whom we worked as well as my own professional focus – reinforced for me the importance of acting on our own behalf, pushing back when things don’t seem right and looking beyond the obvious.

I am forever grateful for those professionals who listened, evaluated, communicated and came up with the right diagnosis in time. I, for one, will be more vigilant in the future!